This week over at I ♥ Faces is a non judged week where we get to tell a story in pictures.  This weeks theme is Holiday traditions.  My hubby and I went on our first date in mid December.  He took me to Bob's Steakhouse (I love steak - seriously) and after dinner on the way back to my apartment we drove through a neighborhood in Plano looking at Christmas lights.  This was no ordinary neighborhood. Their HOA (home owners association for those who don't have one) requires that very house participate in holiday decorations. It was just beautiful. In 2007 we even drive to Natchitoches, Louisiana to see the Christmas Festival of Lights. Anyone in that neck of the woods should certainly make a trip to see their lights, they are fabulous. So that's our holiday tradition. Christmas lights, we just love them!  This year, we just drove around our neighborhood and the surrounding neighborhoods looking at all the lights.  That brings me to my photo of the day: 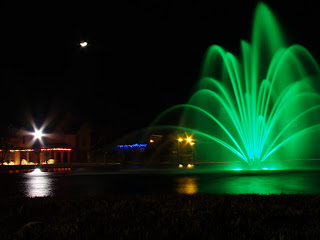 This is the fountain in the neighborhood next to ours.  Usually it is just lit in white, but this time of year they change it to green.  This photo was taken using a 5 second exposure. 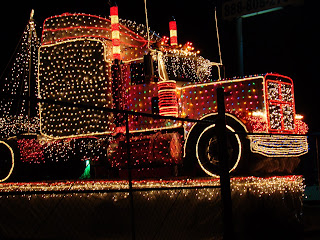 Another picture from last night was this really cool truck.  The used truck lot near our house does this every year and last year I never got around to taking a picture, so I am sure glad they are still around so that I could get this one picture! 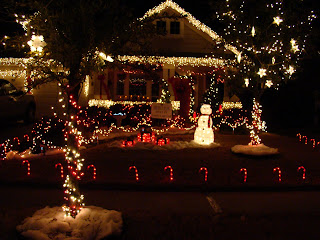 This house won first place for decorations in the neightboorhood across the way.  Of the six surrounding neighborhoods, last night we were able to find five of the first place houses.  Which is not easy to do considering some of the neighborhoods have 500 houses in them! 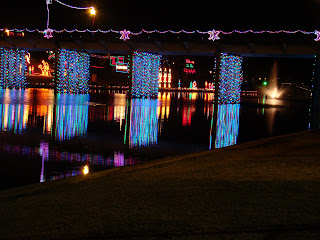 This picture was taken in 2007 at the Christmas Festival of Lights.  As you can see there were a million or so lights (this was the view that had the least amount of lights - but it had the bridge in it which I thought was cool). 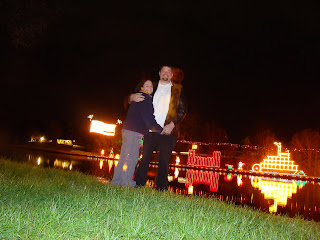 And I couldn't do an I ♥ Faces post without including at least one face.  This is me and the hubby in 2007.  We did a really long exposure and I guess that Ditz moved and thats why there are two of him. Even with that this is one of my favorite pictures of us.

Want to see more Holiday traditions? Head over to I ♥ Faces!