Yes, this photo was taken in the bathroom at work (now you know what that looks like, aren't you excited??).  I cut about 8 inches off, mostly on accident.  The hair cutting lady and I apparently did not communicate very well.  I wanted it to end up about three inches below my shoulders.  This was taken on day three.  To say Ditz hates it is an understatement, but mostly he just really hates change and it was a big change.  I straightened to see if he likes it better straight and he doesn't. So, it'll just have to grow out! 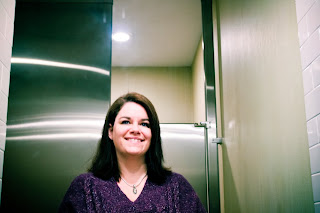