Bored. With a capital B.

That's what I posted last night as my Facebook status and it was true.  I was bored.  I'd walked two miles by six. I have been limiting the amount of TV I watch, so I used up my alotment of TV time by seven.  I used up my "computer" time by eight.  (Facebook on the iPhone doesn't count, it's my rule and I can have all the loop holes I want).  The book I'm reading right now does not intrigue me at all.  Thinking that I will just move on and pick a new book.  Anyway, Bored. Capital B. Katrina replied that I could do her photowalk around the house challenge that she'd just posted. So, I took her list and starting snapping. (I am a photo nerd so any excuse to photograph.....) 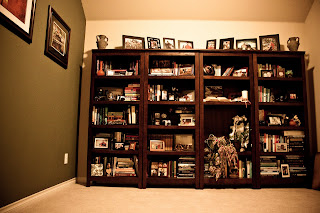 This is a photo I've been meaning to take for awhile now, but just never sat down and did it.  Sure I've taken hundreds of pictures of things on my bookshelves, but never a big shot of the "library." (It's my house, I can call it what I want).  Well, a main feature of the library is the big green wall. I just always imagined a room with bookshelves on every wall and green paint in my dream home.  What I ended up with is bookshelves on one wall and one wall of green paint.  I'll take that any day.  Also, as most people know Ditz hates having his photo taken, well he hates printed photos of him just as much.  So this is the room that I was permission to put up as many "us" photos as I want. So there are 40. Yep, 40 in a roughly 11 foot by 11 foot room.  (I'll also add that someday we'll get something to sit on in this room, but everytime we pick something out we change our minds.  I can't wait until I can read in my library.)
2. Cheer 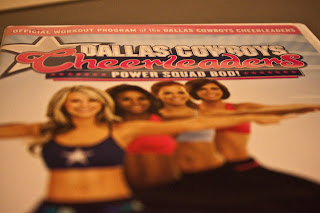 I used to take yoga four nights a week at this great place in Dallas, but once we moved to Fort Worth the drive home was late and long and I just couldn't do it anymore.  So, I stopped.  My former yoga instructer works with the Dallas Cowboy Cheerleaders and they made a video, which I bought.  For him, not the girls, but this was seriously the only thing that struck me as cheer last night. (I'm going to have one of those bodies, see number 5).
3. Chunky 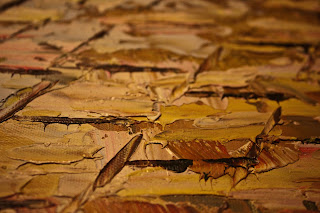 Ditz and I decided a long time ago that since we are both such awesome photographers, there's no reason that our pictures can't be on the walls. (So, yes, every single picture hanging on our walls were taken by one of us).  We also decided that we only wanted originals of anything else that is hung up.  We're no painters, so the three paintings that we own are all originals.  This one is the one that a door to door salesman sold Ditz. Yes, I said door to door salesman. It's a reproductionish piece, but the guy did paint it himself.  I chose this for chucky because this painting has lots of texture.  It's made with chunky paint. (Plus, I wanted to pair it with my smooth picture. : )
4. Smooth 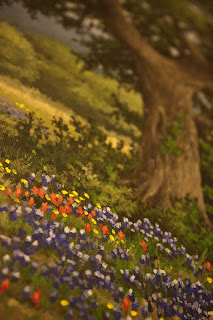 One of the other paintings in our house.  We love bluebonnets - two of the three paintings are of bluebonnets.  This one was a gift from Ditz's dad who told us we could pick anything from their art collection when we first got our house as a house warming present.  Well, we would take an expensive one.  It's how we roll. (This is also an oil painting, but a smooth one).
5. Retro 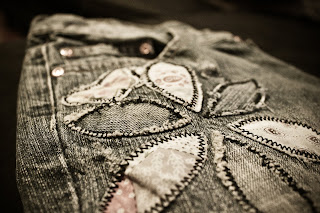 You just wait. Someday I am going to fit into these jeans again.  They've moved with me three times, but I haven't been able to fit into them since that first move.  They were a size too small when I bought them but I made them work back then.  Well, fast forward a few years and here we are. They look at me everyday. I think this is the year I get to wear them again!!
Also, one last little paragraph. This is my 300th blog post. Holy cow, I talk a lot. Lol!!
Posted by Sarah Jones at 7:52 AM