World Famous Corn on the Cob

I have two dishes that I make wonderfully, they are my two claims to fame. : )  One of them is mashed potatoes, but I can't share the recipe because I generally just wing it.  A little of this, a little of that, you know.  But I do have a corn on the cob recipe that always gets rave reviews anytime I bring it to a potluck and often gets requested.  Even one of the chefs at the culinary center in my building asked for the recipe (and then passed it off as his own, I am sure).  I am no Pioneer Woman and don't aim to be, but thought today I would share something other than just pictures.

First you start with corn on the cob. Shucked and cleaned and all that jazz.  Then you cut up the peppers, onion, and jalepeno.(de-seeded).  You can chop and cut these however you want. A little tip from me is that I use this for the peppers because I am LAZY. 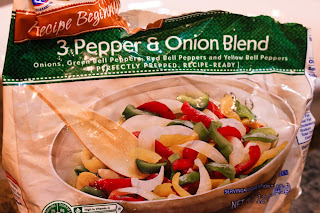 I love recipe beginnings.  They are my hero. Take your aluminum foil and lay it out and put a pretty big helping of the spicy stuff on the foil. 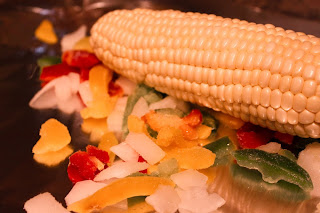 Then take the corn and coat in butter (lightly is my suggestion, but you can add as much as you want). Next sprinkle salt and pepper and the minced garlic. 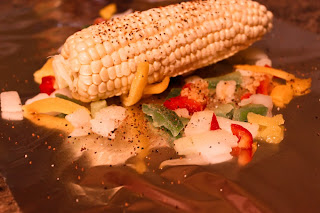 (I also spinkle some garlic and pepper on the hot stuff)
Then you make a taco like thing with the aluminal foil and then roll it up. The goal is to have as much of the peppers touching the corn as possible. 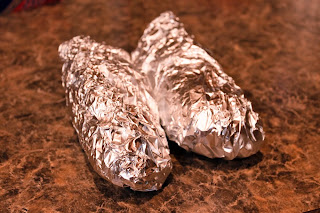 They will look like little burritos. (they are really think but this picture doesn't really show that, I should've done something for scale).  Then you can do one of two things. If you have a lovely husband who is grilling, he can throw these on the grill for 25-30 minutes. Or you can cook it in the oven at 375 for about 30 minutes.
When they are done cooking you can eat them Ditz style or Sarah style.  Sarah style is to toss all of the onions and peppers into the trash and just eat the corn.  You will be able to taste it in every bite, no need to have it there. Or you can eat it Ditz style which is to put those peppers and onions on whatever else it was that was cooked because they too are cooked to perfection. (Alternate is that he sometimes takes the corn off the cob and mixes with the peppers).
Anyway, this is my perfect spicy corn on the cob recipe.  I think I made it up, but probably not. Oh, and to those of you who do follow the Pioneer Woman - Ditz is no Marlboro Man.  He literally hates me having the camera in the kitchen while I cook.  : )
Posted by Sarah Jones at 9:32 PM