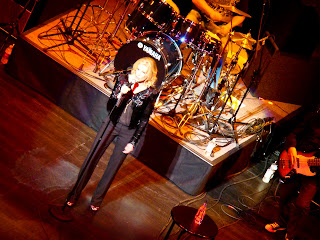 One. I managed one ok picture of Faith Hill. I brought my Sony since I wasn't sure if I was even going to be able to bring in a camera, but I hid it in my purse and then it turned out that no one cared that I had a camera.  Oh well.  Better safe than sorry.  So, how was the concert. It was great, but painful to watch. See she's used to playing 50,000 seat venues and this venue sat 2,000.  At her concerts you have die hard fans who paid a hundred dollars to sit in the nose bleed section and sing every song. This concert, people who probably could care less paid $10,000 for a seat (no joke). At least my boss was smart enough to know he would not enjoy it and gave his seats away (they were not the $10,000 seats). So imagine 1,950 people who are just there to be out and seen in the Ft. Worth social scene and then the 50 people who love Faith Hill and are excited to be there.  That was what it was like. You could tell it was pianful for her. She'd try to engage the audience and get them to stand or clap and nothing.  At one point, I promise you she said - "don't be afraid to stand up....no one will laugh."  Well, no one did (not even me, although I wanted to). But her music. PHENOMENAL. If you ever have the chance to see her perform live, you shoudl jump on it. Even Ditz who doesn't care for country music said she was very talented. (Although for full disclosure he thought she was Carrie Underwood. I only determined that after he asked if she won one of the seasons of American Idol. To which I replied no. And he said she isn't that blond chick that one Americal Idol and went country. Boys. And he had no idea who the Tim was that she kept referring to.) 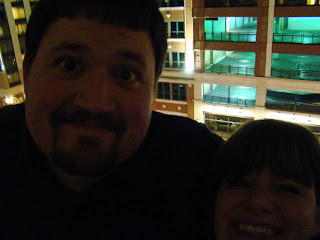 Ok, these are just for fun.  Super bad lighting and now they are grainy, but oh well! 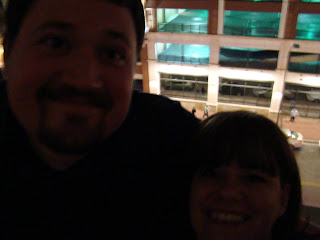 We were outside in the smokers lounge all alone before the show. : ) (No, not smoking. Trying to get some city light shots.)
Posted by Sarah Jones at 11:45 PM