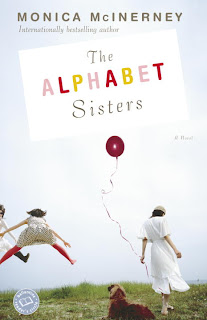 Book description:  Sisters are always there for each other . . . aren’t they?  Anna, Bett and Carrie Quinlan were childhood singing stars – the Alphabet Sisters. As adults they haven’t spoken in years. Not since Bett’s fiancé left her for another sister . . .Now Lola, their larger-than-life grandmother, summons them home for a birthday extravaganza and a surprise announcement. But just as the rifts begin to close, the Alphabet Sisters face a test none of them ever imagined.

My review:  This was an easy, lazy read.  Since I wasn't feeling well, I had specifically picked something that I figured wouldn't be to taxing on my dayquil laden mind. It was an easy read, but not a stupid read, if you know what I mean. I thought the characters were well developed and you really enjoyed getting to know each of them.  In truth, I didn't even see the ending coming, but that could have been the dayquil, who knows.  I picked this book up for $1 at half price books a year or so ago, so it was for sure worth the $1 I spent on it.  I almost wish there was a sequel or something I could read.  I've add Monica McInerney to my list of approved authors (It's a list I have so that when I am at half price books, I'll know whose books I've read and liked. Trust me I've bought a ton of awful $1 books that were just awful!).  I would give this book a solid B.
Posted by Sarah Jones at 5:08 PM