Yesterday was supposed to be a lazy day getting ready for a busy next few weekends. Instead, like we almost always do when we set out to do nothing, we were out and about most of the day.  First we drove all the way to Arlington (about 45 minutes) to go to Arlington Camera so that I could try out the black rapid camera strap.  It's designed for boobs, seriously. It has a contour which is pretty stinking cool.  After driving all the way over there, we HAD to buy it.  It's actually quite cool once I get used to it, I think I'll love it.  Anyway, not wanting to go home for whatever reason we went looking for something different to do and ended up at the Vintage Aircraft Museum in Forth Worth. Only we were too late and they were about to close for the day so we couldn't go in.  At that point we opted to go see an IMAX movie at the Fort Worth Museum of Science and History.  We were early for that, of course, so we headed to the Fort Worth Botanic Garden where they were having an art show.  I am just not sure that Ditz and I are the appropriate people to judge art, but they gave everyone a card to vote for best in show.  We wandered around for about twenty minutes looking at the pieces. In the end, Ditz and I ended up voting for the same guy, but different works.  I'm sure we'll never know who actually won.  There were a few photographs in the art show and I think since I know some many wonderful photographers, I was very unimpressed.  (Seriously, the group I hang out with on Flickr is so talented, it's scary.)  I might try to figure out how to get a couple of my pictures in there next year. : )  Anyway, we wondered around just the front of the botanic garden since we didn't have much time before the movie started.  These shots were all taken at the entrance.  I had never seen these little peppers anywhere else in the garden and probably never would have since I rarely go int through the front gate. 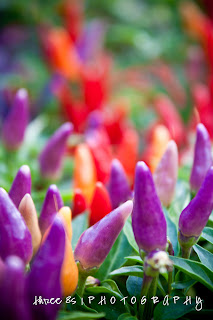 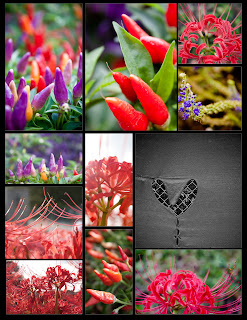 Here are some of the other pictures taken at the gate (two of them are Ditz's).   We made it to the movie on time and hoped that it wouldn't be like the IMAX movie we saw in Galveston which was nothing but beating about global warming.  Three quarters of the movie we saw (Under the Sea) was fine.  It was that last quarter of the movie that made me want to scream.  I just hate when you can't just simply enjoy the beauty of the sea. Anyway, after we got home we were playing with light painting.  But, I am going to save that for another post. Trust me when i say it's really cool!
Posted by Sarah Jones at 12:17 PM