Ditz and I love to go into antique stores and flea markets, but generally only go when we are out of town. On Sunday we stopped by the little flea market in downtown Keller.  This little store has all kinds of goodies!  Here's what we picked up today: 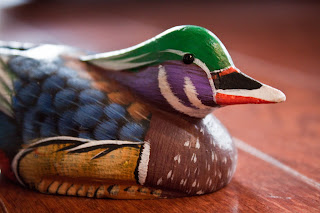 This duck.  Ditz loved it and I will say that someone did put a lot of time and effort into painting it.  You can't really tell in the picture but there is lots of shading and whatnot. 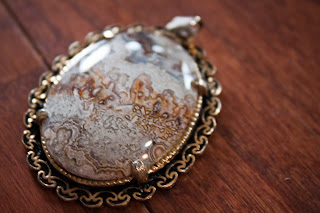 Another Ditz purchase.  He really liked the stone and still bought it after I told him that I wouldn't wear it.  So now we are trying to figure out what to do with it. 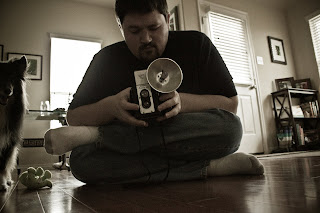 And there's Ditz holding my purchase.  A camera from 1964ish. You look in that little top thing to take a picture and he was pretending to take a picture of me.  (and there's Chase trying to get us to throw his froggie). And for anyone wondering where our couch is, we moved it to the front room to get some sort of scale for what size couch we need in that room.  And the answer is: one way smaller than we have now. ; )  So much for our hope to buy a new couch for the living room and move the old couch to the front room..... 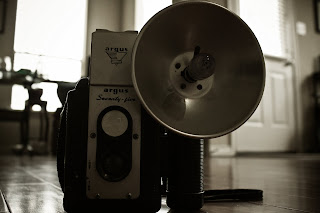 A close up.  The flash still works, which is cool.
Posted by Sarah Jones at 7:25 AM