On Saturday night, Ditz and I ended up in the Grapevine area for dinner. We had dinner at Uncle Julio's and then thought maybe we'd head over to Founders Plaza at the DFW airport to watch the planes land. If you've never been and you live in the DFW area, you should really check it out, it's a great place for a picnic. (Also, if you live near a big airport in general there is sometimes a place like this. In Virginia they had a really cool one that we hung out at one time when we were super early to the airport). Anyway, you get to listen to all the pilots and air traffic controllers through speakers that they have set up and that is pretty cool. I just wish I knew more of the lingo, but oh well. 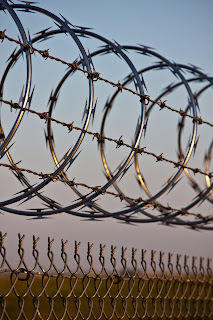 Straight out of the camera. : ) You can totally see the sunsetting in the barbed wire. 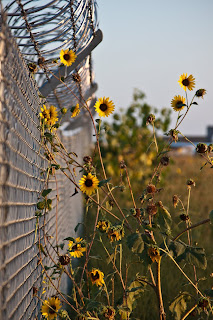 I'm a sucker for sunflowers! 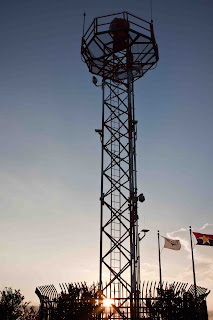 This is the actual DFW beacon.  There are tons of cameras aimed at this bad boy. 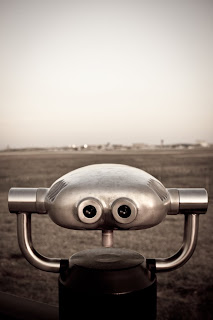 They had these little guys so that you could see super close-up.  I think it looks like a face, but that's just me. 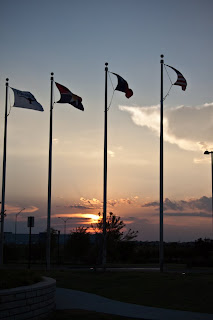 The park closes at sunset so it was just about time to close when we left. 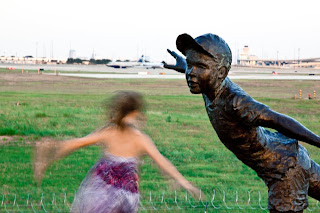 This picture was taken by Ditz.  These little girls were running and climbing all over the place.  I thought this was a pretty cool shot considering she is doing the exact same thing as the statue.
Anyone notice any thing different about today's photos that you don't see from me very often?  No, ok I'll tell you.  All of my favorite photos of the day are of the portrait orientation.  I am usually more of a landscape girl, but I got one of these as an anniversary gift and it makes taking portraits so much easier.  Something about having a button on that side of the camera is just neat-o.  And yes, it does add weight to the camera, but it makes me steadier if that makes any sense.
Posted by Sarah Jones at 7:44 AM