One of only two days were it did not rain so we tried to get in all of our outdoor stuff.  The first thing we were going to do was to go to St. Joseph Abbey. From their website: " North of the town of Spencer, Massachusetts, at the crest of a steeply sloping hill blanketed in oak, maple and pine, but bared in part by farmed meadows and broad pasture lands, rests Saint Joseph's Abbey, a cloistered Roman Catholic monastery of monks of the Cistercian Order of the Strict Observance, popularly known as Trappists."  You are probably curious as to why we were making a special trip here.  Well, that story starts back in the 1950's when Ditz's grandfather, Ditzler, began helping the Trappists market and sell their preserves, which you can still buy today. The monks all became very good friends with the Joneses and have fond memories of him.  So why did we go?  Ditz's grandfather and grandmother are both buried at the abbey.  His grandfather is the only non-clergy man and his grandmother is the only female.  It is a great honor for them to be buried there.  We got a personalized tour from two of the monks who knew Ditz's grandfather and recounted lots of really neat stories,, including the day before he died and the funeral. He died in 1968 and for them to still remember it like it was yesterday is just amazing.  As a funny side note, we were making a purchase in the gift shop and the monk running the gift shop even recognized Ditz's name from his credit card and even he knew the story of when his grandfather died (and he was no where near old enough to have known Ditz's grandfather.) 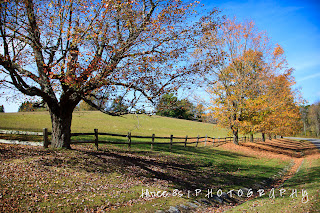 My photo of the day, This is the road leading up to the Abbey, past the gift shop. I just loved this road. 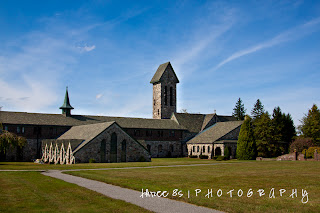 This is the Abbey. I was very lucky to get to see it on a clear day so that there was blue sky in the background. (Ditz said this photo looks like a post card. I'll take that as a compliment.) 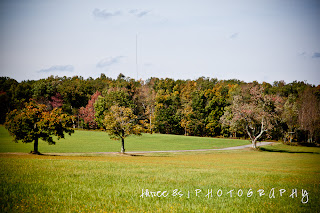 Just to the right of the Abbey as you are looking down their hill.  What gorgeous views they have. 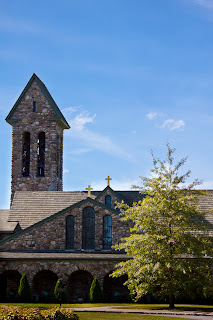 Another quick view of the Abbey. 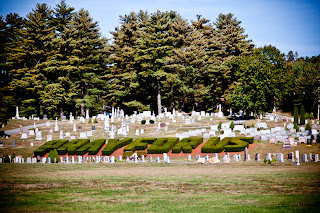 This is the cemetery in the town of Spencer.  Some one takes great care with their hedges. 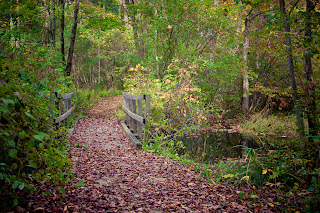 So, since it was not raining (yippee) we opted to go hiking in Wells State Park. 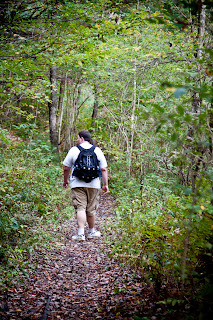 We brought plenty of supplies since it was sort or warm. 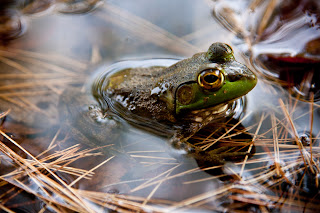 The dueling frog photos. This one is Ditz's.  I really like his. And since there were frogs everywhere: 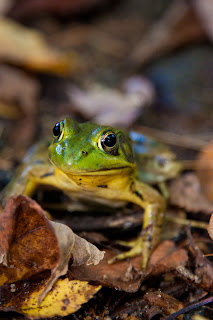 This is mine. Or better known as a good attempt. : ) 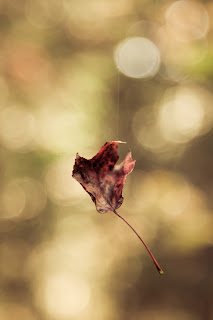 I'd like to pretend I caught this leaf falling in mid air, but I didn't. Still fall leaves make for beautiful bokeh. 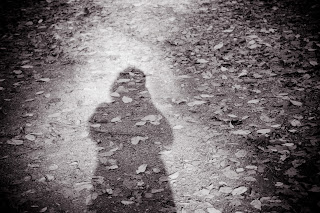 Just so you know I was also on this hiking trip. 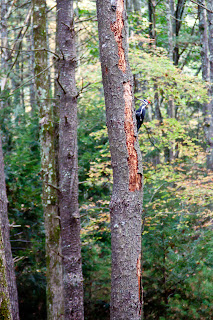 Do you see the woodpecker?  This was as close as I could get before it flew away. 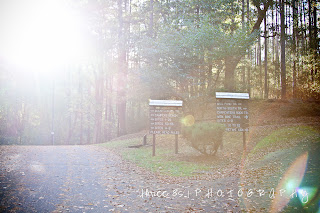 I did this on purpose for those who might've thought it a mistake. I really love the way it turned out. 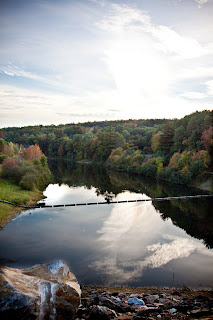 After going to Wells State Park we ended up at the Westville Dam (don't ask me how, we just did).  It quite a neat little walking trail along the water. 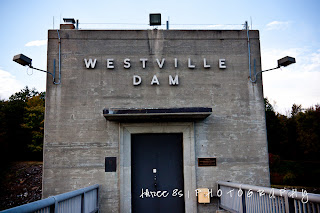 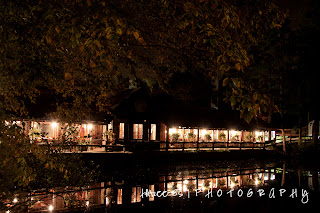 And we ended the day at a restaurant called the Old Mill about an hour away.  It was well worth the drive.  I just wish that we would have made it when it wasn't quite so dark so that we could have gotten some pictures. This one was taken by Ditz because his hand is way steadier than mine!
Posted by Sarah Jones at 10:27 AM